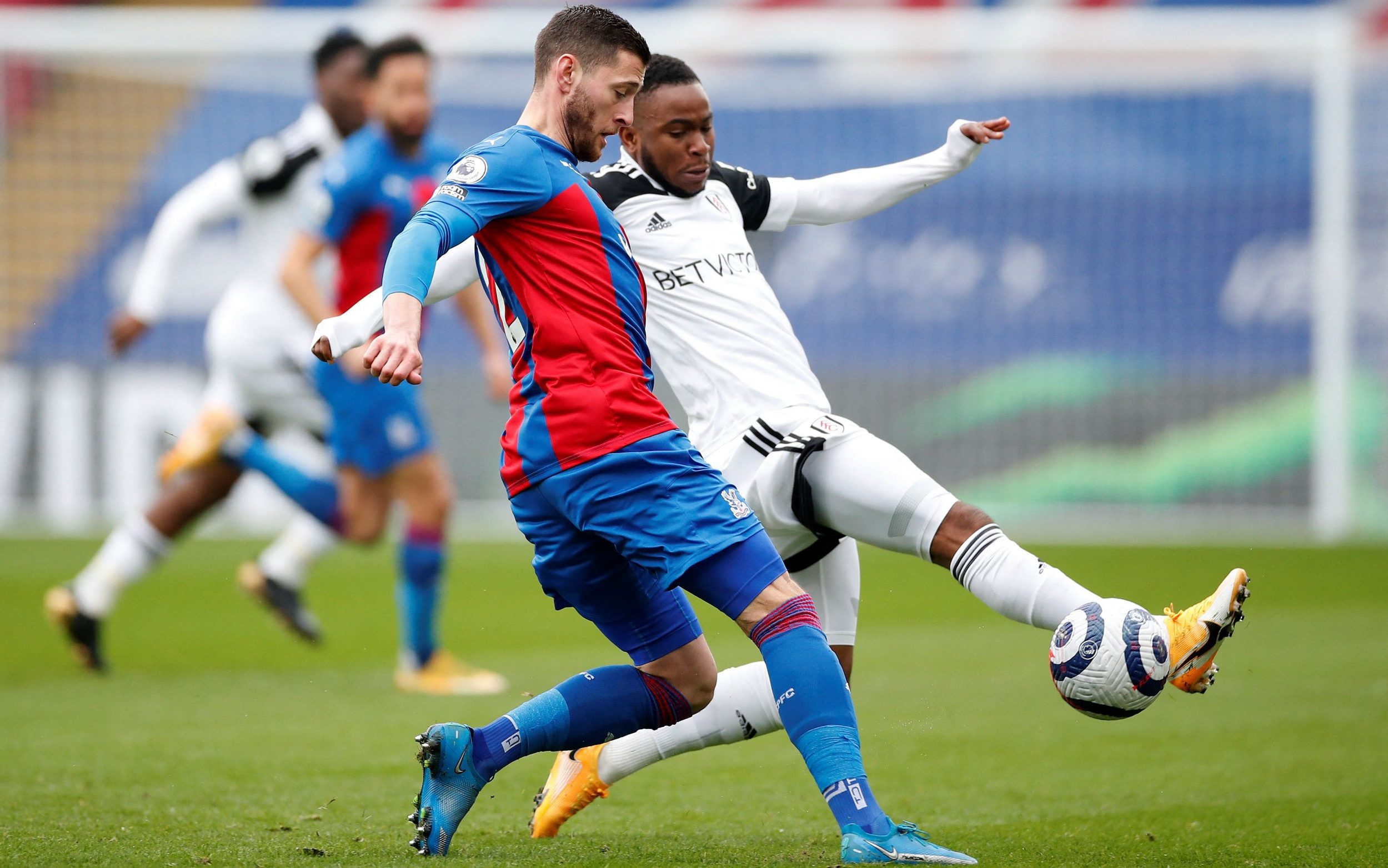 Fulham corner, it eventually falls to Andersen on the left, eight yards out has a shot but Gary Cahill slides in and blocks desperately. Great defending but Fulham edging closer here.

Loftus-Cheek has a crack from distance! Cavaleiro chests it down to him, he waits for it to sit up and volleys hard but cuts across it a bit too much. Slight slice and it goes wide.

Maja in again! Cavaleiro with a quick and hard cross from the right. Maja is there with his head. it’s on target but Guiata sticks out his left hand and keeps it 0-0. Should have done better that time, definitely. Head. It. Down. Good save, though.

That is clear chance. Maja has a shot from the edge of the box after a neat flick on from Loftus-Cheek. It’s struck well with his left but slides just past the far post. Should have done a bit better there. But this is more promising from Fulham. Just need to make it pay now.

Decordova-Reid off for Cavaleiro.

Palace win a free kick in a good position, from the left corner of the box. Townsend with a good, whipped and dipping delivery in but nobody can get their head on it from either side. Cahill is probably the closest but barely even an attempt from Palace.

Palace make their first attack of the half via Townsend but Fulham clear their lines.

Fulham have come out with more intent. Or that is how it seems. Either way, they are actually creating something now and look like making their dominance pay. Loftus-Cheek with a low shot from the right, 22 yards out. He’s in space and tries to curl it with his left but he can’t get the connection quite right and Guaita saves again.

Andersen lines it up, fires hard and low to the keeper’s right but wide of the post. Not by much and Guaita had gone the wrong way and was firmly wrong-fotted there.

Fairly poor corner is cut out by Townsend. Fulham come again, Andersen latching onto a looping ball, gets a half-decent connection but it rolls to Guaita. Better from Fulham.

Milivojevic fouls Loftus-Cheek and gives away a free kick 25 yards out, right in front of goal.

Decordova-Reid and Tete link up on the right and win a corner for Fulham. Could have been a bit more but a corner will do for now.

Another shot on target. A free kick whipped in from deep on the right, Tosin turns his back on it and can only glance it down into the hands of Guaita. Good ball in but just difficult to get much power on the header.

Would a draw suit both sides? I mean, Fulham have been the draw specialists this season, especially in the last few months. It wouldn’t be a terrible result for them, though, but a win would be fantastic, taking them to within a point of safety. Palace – well, it’s another point.

We are playing again at Selhurst Park. Let’s hope for something better…

Maja… has a shot? For Fulham. From distance, just in the Palace half on the right touchline. It’s safely into the hands of the keeper and it is definitely a shot. And one on target!

Antonee Robinson on for Aina.

Very much a game of little. Fulham probably the happier, they have been just about better than Palace. Probably one of the dullest halves I’ve seen for quite some time.

Aina bursts through with the help of Lookman. Anguissa thinks about a shot from 25 yards out but decides against it and wastes his cross.

Cahill sends a good ball from the back out to Ward, he finds Townsend who sends in another cross of his own. Areola comes out and claims comfortably. Could really do with a shot… on target… or something, in this game.

No goals in this one but two in the other match happening concurrently. Arsenal have equalised via David Luiz. 1-1 at the King Power stadium.

Well, what can you say about this half? It has lacked quality or inspiration of any kind in the final third. Decordova-Reid gets a scrape down his lower leg from Benteke. Looks painful but he’ll be fine. He is still limping a bit a minute or two after. “Run it off,” my dad would say.

Another Fulham free kick sees Andersen head over. A much better chance this time as a free kick from the right edge of the box comes in. A free header as he loses Kouyate, but it’s a mistimed header and he lands awkwardly. Came off his face more than his head, it seems.

That’s a chance… of sorts. Fulham corner from the right is a big outswinger. Andersen gets his head on it but the connection isn’t full enough and it slips harmlessly wide of the far post.

A little better from Palace in the last five minutes, with Townsend involved on the right. Fulham have been the better side and more comfortable but have also created next to nothing. Not a great game, this. A real lack of urgency.

Ooh, searching cross from Townsend from the right corner of the box. He sends it in with his left, Benteke is waiting in the middle but Andersen pokes it back to Areola from seven or so yards out. Heart in mouth moment, there. Closest any side has come.

Palace really struggling to get out of their own half… they do this time, with Townsend on the right. His cross finds Ayew but he can’t control it quickly enough. Still no clear chances – or even half-chances – for either side though Fulham definitely having the better of it.

Riedewald fouls Reed though he was only marginally late as Reed was sliding in. Fulham come again with this free kick.

Fulham with a free kick of their own now, in a more dangerous spot. Reed in… trying to find Decordova-Reid but the danger is snuffed out by Milivojevic.

Palace have a free kick though it is 45 yards out and comes to nothing. A bit of a ponderous delivery. Fulham win a throw, with Parker quickly throwing the ball back to his man on the touchline. He’s keen! And well dressed.

Fulham on the right, looking promising but Cahill slides in and cuts out the danger… for now. Palace under a little bit of pressure here, without much ball in the last 10 minutes. Fulham have not really been close to hinting at a chance, though, never mind actually creating one.

Van Aanholt is pressured in his own box and can only boot it out for a throw in 10 yards from the corner flag. Fulham pretty intense out there with a bit more of it in the last five minutes.

Lookman harries Ward, going backwards but is a bit too eager and gives away a free kick just in the Palace half.

Palace attack. Ayew crosses in to Benteke on the left of the box, tough to control and he tries to chest it but can’t get it down enough to be able to get a shot away. Was quite a floaty cross and I don’t think he could have done much more, but he was in a promising position.

Decordova-Reid into the box and looking promising but loses control. Palace win a free kick just outside the box.

A cross comes in from the right to Lookman on the edge of the box but he cannot work enough space to get a decent shot away.

We are under way at Selhurst Park.

Hodgson asks about how well Palace can cope with Zaha. He says that they coped when they beat Brighton.

I have no reason to doubt them today. It’s another very important fixture for us against a team playing well at the moment. It will be a hard ask.

Big opportunity. I think we’ve probably seen that over the last few weeks. Of course, results have brought other teams into play. I think we’re a very different team [to when they played Palace last time]. New to the league at that point. This team has improved drastically over that course of time. This has been a team that has progressed and improved.

In the last three months, Fulham have been a far stronger team than the league table suggests. Since the end of November they have lost only four league matches, all against the current top four. And in the last 14 games they have conceded just 13 goals, a defensive record bettered by only Burnley and Manchester City.

Palace’s form has been fairly mixed

Fulham in decent form of late

At least for a side that is in the relegation zone. Two wins in their last three games and only one defeat in their last five. Here’s how they’ve been doing.

Palace still sort of hovering around that danger zone but 10 points clear of Fulham in the final relegation spot means there cannot be too much concern at present. Fulham have been pulling their way gradually up the table in the last month or so.

COME ON YOU PALACE #CPFC | #CRYFUL

Hello and welcome to coverage of Crystal Palace vs Fulham from Selhurst Park.

Palace are 10 points clear of the relegation zone after their last-gasp win over Brighton on Monday.

Christian Benteke scored the winner at the Amex Stadium and manager Roy Hodgson is hopeful the Belgian striker can get back to his best.

“If you don’t score goals as a centre-forward, you don’t get too many pats on the back,” Hodgson said. “We’ll be happy as long as he’s getting into those positions. We believe if he keeps doing that he will score goals and they don’t all have to be as spectacular as the one the other night.

“If he gets a run of games, which he’d need to merit because there are other players looking to take his position, then let’s hope he can make certain the false dawn that has been alluded to isn’t a false dawn and we get back Christian Benteke in the same form he was several years ago.”

Meanwhile, Fulham boss Scott Parker has hailed goalkeeper Alphonse Areola, who joined the club on a year-long deal from Paris Saint Germain in the summer and has kept seven clean sheets.

“To be fair before he came to the club we looked at it and thought what do we need. And certainly in this moment physicality, presence, bravery as a keeper in terms of all those attributes was something that me and Rob (Burch, goalkeeping coach) highlighted really,” he said.

“And looking at Alphonse and his stature and games he has played, I had no doubt that was what he was. A very aggressive keeper, a front-foot keeper who wants to come and command his box, come and collect.

“Physically very very big, agile. They were all the areas we looked at and they were the areas he ticked those boxes, and that was exactly what we need and we’ve not been shocked in any way by that.

“If anything, it’s just proved even more so that when he has come in, what we see daily and what we see in games is exactly that so he has been very good.”